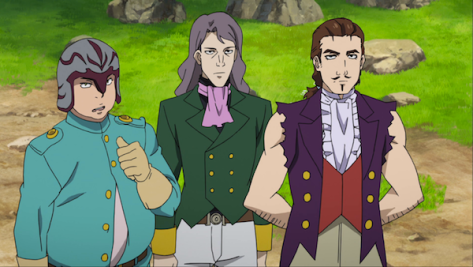 Not the greatest episode but still pretty good.

The scene opens on a mysterious shadowy figure killing an emissary. We know they are evil because they lick their lips before they slice the victim’s neck with their knife. This assassin is also guarded by a small gathering of knights…

Elsewhere, Alberic has reported back to headquarters, where he requests to see the file on Emperor Gaz again. Even though he’s been on the case for five years, Gilette still does not know anything substantial about either the Emperor or his daughter Chaika. He also posits that the white Chaika he met may not be a threat, as it didn’t seem that she wanted to overthrow the state. Her wish was merely to bury her deceased father. “There must be something more..” Before Alberic can continue down this path, his boss Konrad Steinmetz (we met him a couple of episodes ago) “suggests” he take a break from the case for awhile. In most cop dramas/procedurals when a superior “suggests” taking a leave, that means something is going on behind the scenes. Is Steinmetz a more important character than we realise he is? Or is he merely in on the plot, but has no real power in the scheme of things? We know at least that he knows something that he isn’t letting on. Later in the episode, Gilette does some scrounging for information in the records, but to no avail. There is no ready info on the mystery of Emperor Gaz.

With Chaika, Toru, Akari and Fredrica (greatest sidekick evah) they come to a “toll point” in the road. The men running it declare it property of the Neo Gaz Empire. General Mart (word puns!), Minister Lavr, and Frol are the three that run this group along with their own Princess Chaika. Their mission is to restore the Gaz Empire and raise Chaika to her throne.

A blonde haired woman whom they have made up to look like Chaika appears, but the show isn’t trying to make us think that she is another Chaika. Rather, it’s trying to make us guess why this person is masquerading as Chaika. White Chaika pays the toll without a fuss – but does so with a silver coin, tipping off her higher social position. Neo Gaz decides it necessary to “search” their vehicle.

Akari comes up with a backstory; they are “performing travellers” and Chaika’s coffin holds their props. It’s agreed that in order for them to pass they will have to perform for “Princess Chaika.”  Their “performance” is a genuinely funny scene, topped off of course with Fredrica, but I won’t ruin it for you guys.

Is this “Chaika” imposter a trained assassin (the one from the opening kill) who has tricked people into thinking she is Chaika? Or are they a team of people attracting individual Chaika’s in order to kill them? Or they do truly want to restore the Gaz Empire? It’s nothing mind blowing, but the plot of the episode does go in a direction I did not immediately expect. Chaika has not been predictable so far and I hope it stays that way :D!

One note of interest though: the Neo Gaz group do mention something about Emperor Gaz conducting dodgy human experimentation during the war. Even though it is just a rumour, it could have something to do with the multiple Chaika’s. It wasn’t the best episode of the series, as the climax of the episode was a bit weak, but even so it was still fairly good. It was better than the last episode of Captain Earth at least. 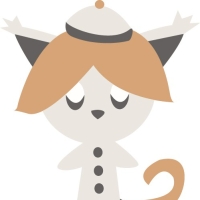